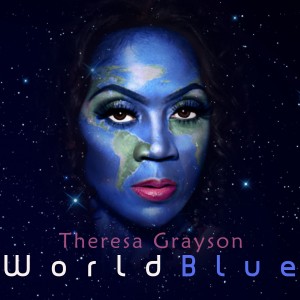 Theresa’s fourth album is dedicated to the wonderful styles of music from around the world. Compelling compositions written by Terence Fisher, Edwin Brown and Theresa Grayson with energetic covers that will keep you dancing and swaying while enjoying the musical presentation of Theresa on vocals, flute, soprano and tenor sax!

Blending everything from pop, European, France to Asia, Jamaica to Africa, India, Mexico and traditional jazz. Grayson brings a fascinating background as a first call side person to her evolving solo career. It is a testament to Grayson’s powerful, high impact composing skills that the original songs on this international album World Blue stand up perfectly alongside a batch of smartly arranged covers of songs that were smash hits.

There are no reviews yet.